What digital I/O lines does the BB-400 have?

The BB-400 has 8 I/O lines in total, and they can be found on the following terminal blocks in the corresponding configurations:

Note: if either terminal is being used with a IO line, the -V line (Pin 1 on both terminals) must always be connected.

The status for each IO line (Pins 2-5 on both terminals) can be identified on the leading face of the device. The LEDs on the front of the BB-400 relate to the current state of that I/O line. If the voltage is high then the LED is on, and if the voltage is low then the LED will be off.

The IO lines on the BB-400 can be configured between NPN and PNP modes. NPN inputs pull up to 5V when not driven, and PNP inputs pull to ground when not driven. The NPN/PNP jumper can be found inside the BB-400. If the BB-400 is held with the 2 supercapacitors facing upwards, the jumper is located on the reverse PCB, along one of the edges, highlighted in the image below. 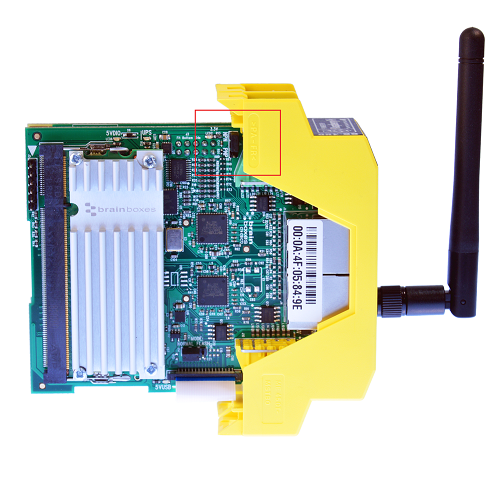 To control the I/O lines, an Arduino (ATmega32U4) is used. By default, it is loaded with an I/O server which responds to a command set just like other Brainboxes’ ED devices, over serial from the Raspberry Pi compute module. An important thing to note is that even though the Arduino can be reprogrammed as necessary, the ‘Hardware I/O Line Drivers’ and ‘Pins Exposed’ remain the same.

But at what point does the value change from 0 to 1, or vice versa, as the voltage changes between 0 and 30V?

The logic levels for the BB-400’s I/O lines are as follows:

The aforementioned logic levels for the input lines are compatible with TTL requirements. TTL is a classic 5V chip-to-chip connection, allowing the ED device to be wired directly to chips on customer’s PCBs.

With a transition from 0 to 1 occurring between 1V to 2V, and a maximum input voltage of 30V, ED inputs are perfectly compatible with 12V and 24V devices.

The logic levels for these inputs are as follows:

The digital outputs found on the BB-400 are currently ‘Sinking’ outputs, which means they can easily pull the output down to ground, but cannot pull the output up. They act like a switch shorting the output to the ground pin. The maximum current a single output can sink is 0.85 Amp, so large loads can be switched.