What Physical Ports are on the BB-400?

The BB-400 has an array of ports built onto the device which allow it to perform all of the necessary functions required to operate in the next generation factory environment. There are 4 independent Ethernet networks, 2 physical connections via Ethernet but also 2 wireless network connections and 4 number and colour coded terminal blocks. The specification of each port is outlined below.

The Uplink port is specifically used to connect the BB-400 into a Wide Area Network or WAN, with the most common example of this being the internet. Although it is primarily used for internet connectivity, it can also be used to connect the device into a large private network typically found within a private organisation.

The Uplink port uses Dynamic Host Configuration Protocol or DHCP to retrieve and assign an IP address from the network to itself automatically. The port itself too has features, at the bottom of the port there are 2 LEDs on either side of the connector, each is used to display a message to the user about the ports status. Each LED is labelled and is used to represent a different port state. 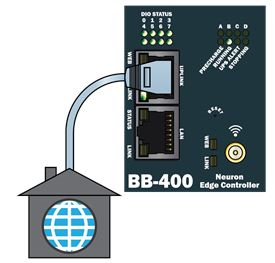 The second Ethernet port on the BB-400 is referred to as either ‘Eth1’ or ‘LAN’, and like the Uplink port it has a specific role on the device. This port is used to connect the device to a Local Area Network or LAN. A key feature of the BB-400’s LAN port is that when it is connected to a LAN, it automatically takes control of the network and how devices connected to the same network operate.

It is important to note that, when the BB-400 connects to a LAN unlike the Uplink port, the LAN port does not use DHCP to get an IP address for the network. The device has a factory default IP address which is: 192.168.127.1. In addition to this, the BB-400 acts as a firewall, in effect shielding all devices connected to its network from any outside connection. Furthermore to the firewalling, the BB-400 also allows insecure devices to be both physically and logically connected to a WAN.

Much like the Uplink port, the LAN port too has a pair of status LEDs. They are located at the bottom of the port, either side of the connector, and again each represent different states of the device. 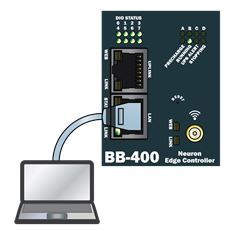 A key feature of the BB-400 is its 4 colour-coded terminals with numbered ports: 1 serial, 1 power and 2 digital Inputs/Outputs. Each port on the BB-400 is a different colour which allows the user to easily identify which port is which on the device.

The BB-400 features a configurable serial port, as represented by the grey terminal. The serial port can be reconfigured to best suit the needs of the user, with the functionality of being either a RS232, RS422 or RS485 port. In addition, the terminal allows for a wide range of Baud rates ranging from 300 to 921,600. Finally, there are 4 resistors on the inside of the case which can be changed to configure how the port works. They are labelled as FT, HT, B- and B+.

Where FD is Full Duplex & HD is Half Duplex.

The BB-400 has a removable power terminal used to supply the device with electricity. As the terminal shows, there are 5 pins (reference pinouts below). The pinouts for this terminal are unique to the BB-400, from left to right, the pins are as follows:

Pin 1 is the first neutral pin, this is where conventionally you would insert the power supplies neutral wire.

Pin 2 is the first live pin, again, this is conventionally where you would insert the power supplies live wire to give the device power.

Now comes the unique feature found on the BB-400, because of its internal components (See ‘Raspberry Pi Considerations’ in the hardware section of the manual for more details on this feature and why its implemented) the BB-400 required a secondary input voltage in order to protect itself from damage should there be a sudden loss of power. The power terminal on the BB-400 features a second power supply.

Pin 3 on the terminal is referenced as Vb, and this is where you can attach a secondary power sources’ live wire, with Pin 4 being the neutral wire. Both neutral wires, Pin 1 and 4 are labelled as –V.

The 5th and final Pin 5 is simply a ground wire as featured on many terminals:

The BB-400 has configurable digital input/output terminals allowing the device to be set in a number of different ways. Again, both terminals are numbered and colour-coded, and their pinouts are as follows:

Please Note: When any of the BB-400’s DIO ports are in use, the -V or Ground pin (Pin 1 on both terminals) must always be connected.