How Hot is Too Hot for Raspberry Pi?

How does Pi deal with overheating?

A reported issue with Raspberry Pi can be overheating, with a resulting loss of performance, when the board is exposed to high temperatures.

What is the maximum operating temperature of a Raspberry Pi?

To keep costs low, the Raspberry Pi is built with commercial-grade chips which are qualified to different temperature ranges; the USB and Ethernet controller of the Pi 3+ (Microchip LAN7515) is specified by the manufacturers as being qualified from 0°C to 70°C. The SoC (System on Chip – the integrated circuit that does the Pi’s processing, a Broadcom BCM2837B0) is qualified from -40°C to 85°C.

This effectively means that the maximum operating temperature of Raspberry Pi’s key components is 70°C and 85°C respectively. In considering the effect of overheating on a Raspberry Pi prototype, it is necessary to consider other sources of heat. In addition to the ambient temperature, all applications make demands on the Pi’s CPU, GPU, and hardware, and as this load increases so does the temperature of the board – particularly to the two key components – the USB and Ethernet controller, and the processor (SoC).

How does Raspberry Pi deal with high temperatures? 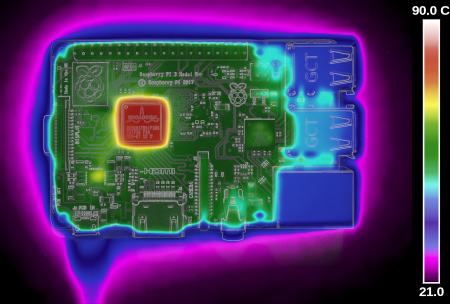 It has been reported that Raspberry Pi can be vulnerable to overheating issues. The thermal map above shows a Raspberry Pi 3+ processor reaching towards 90oC. In some tests, the Pi’s SoC has been shown to exceed 100oC. In certain situations, the Pi can be pushed beyond its qualified operating temperature range, therefore its long-term performance is not guaranteed.

CPU underclocking is the process of limiting the frequency at which pulses are used to synchronize a processor’s operations. In other words, to deliberately underclock CPU is to consciously reduce the speed of the processor. Underclocking reduces the load-induced temperature rise as slower transistor switching reduces power consumption requirements and therefore generates less heat inside a device.For Raspberry Pi 3+, a ‘soft’ temperature limit of 60°C has been introduced. This means that even before reaching the hard limit at 85°C, the clock speed is reduced from 1.4GHz to lower frequencies, reducing the temperature rise to the components. This underclocking increases Pi’s system stability at high temperatures, aiming to ensure the operating temperature remains below the 80°C ‘safe’ level, but this comes at the expense of the processor’s performance. When a system deliberately underclocks by throttling the CPU to protect from hardware damage; the speed of the processor is slowed down, which inevitably limits the speed of operations.

By default, Pi’s soft limit is set at 60°C but it is possible to set the temperature at which CPU throttling occurs to a higher threshold value. By adding the line temp_soft_limit=70 to the /boot/config.txt file, automatic underclocking can be ‘postponed’ until the Pi reaches a higher temperature. Whilst Raspberry Pi’s CPU is generally capable of withstanding high temperatures for short timescales, continuous operation at the upper end of the range does pose some risk to the longevity of the device.

Are there other ways to avoid overheating?

Fortunately, any solution that decreases the effect of ambient temperature or load induced temperature rise can help keep the SoC under the soft limit without the need to limit the application load or throttle the speed of the processor, even in industrial applications.

By simply moving the Raspberry Pi into an upright orientation with the GPIO header at the bottom and the HDMI ports at the top, management of
the ambient temperature will be improved. 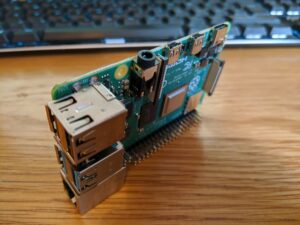 Orienting the components vertically will have an immediate impact on cooling, and will slow subsequent heating down, as improved convection allows the surrounding air to draw heat away from the board more rapidly. Additionally, the available surface area for cooling is increased by moving the rear of the board away from heat-insulating surfaces.

If heat can be removed from the components quickly, then the load induced temperature rise will not have an effect on performance. One option to dissipate heat from Pi’s components is to mount a cooling fan, powered through the GPIO. Compatible fans are widely available at a relatively low cost and can be positioned to deliver cooling to where it is needed most: the SoC. For an industrial prototype, however, installing a fan may not be the best solution. Moving parts like fans require maintenance in industrial environments to ensure they don’t get clogged with dust. Also, assuming the Pi will be connected to other I/O and possibly extra circuitry in the form of one or more breadboards, the addition of another external element will create a bulky prototype not suitable for deployment straight to the factory floor.

Designed with a maximised surface area to improve contact with a cooling medium – such as air – heat sinks use convection to disperse heat from electronic devices even when no airflow is present. In developing the model 3+, the Raspberry Pi Foundation elected to fit a metal shield over the SoC to improve convection cooling and dissipate more heat than the model 3.

Whilst tests indicate that the Raspberry Pi with the metal shield (Pi 3+) performs better than without (Pi 3), for industrial applications, the addition of a purpose-designed heatsink can help combat high temperatures and dramatically reduce the temperature of the SoC.

Brainboxes designed a custom aluminium heatsink for the BB-400 Industrial Edge Controller, that sits in direct contact with the Pi’s SoC. The surface area of the heatsink is maximised to most efficiently utilise thermal conduction and draw heat away from the processor. When situated in the industrialised cover, the Raspberry Pi is in a vertical orientation aligned with the vent openings and so also exploits heat convection to provide the
highest degree of cooling possible. In addition, the LAN7515 is replaced with an industrial spec chip, making all of the BB-400’s components rated for
industrial operation (from -25oC to +80oC.) 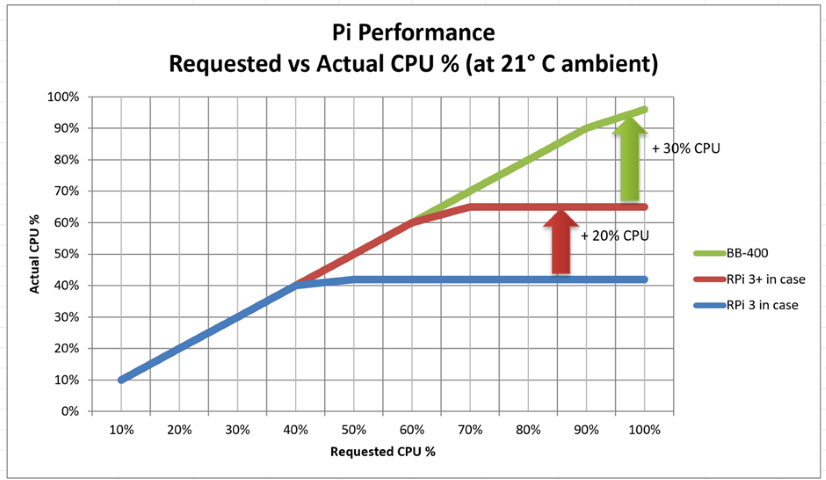 The BB-400 with its custom heatsink can deliver 95% CPU performance for sustained periods – ideal to utilise the wonders of Raspberry Pi outside of the environments it was designed for, and making it suitable in industrial settings.

What are the heatsink capabilities of the BB-400?