How do I send an Xon/Xoff character to control data flow?

Xon-Xoff is a flow control method used in communication between devices. It is in distinction to hardware flow control, which is done by specific out-of-band signals, such as DTR/DSR or RTS/CTS on the RS232 standard protocol.

For example, you have two devices, A and B, and A is quicker at sending data than device B is able to receive and process the data. Device B will very quickly reach a point where it can no longer process any more data and will be overwhelmed by the amount of data being sent by device A. At this point, device B would need to send an Xoff character to device A, so that it stops sending data. It will not send anymore data to device B until device B has sent an Xon character to device A, thus allowing device A to know that device B is ready to receive more data. 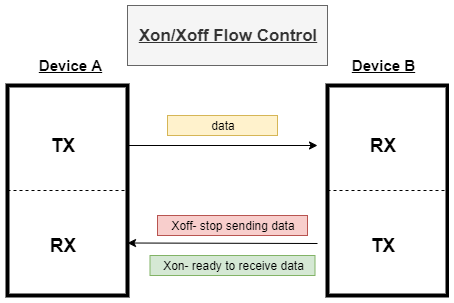 Xon-Xoff uses special codes agreed on by both the transmitter and receiver.

The table below is an example of some of the ways of expressing Xon-Xoff codes sent in the data flow, although these can be set to other values.