This article will provide guidance on how to connect the BB-400 to an Android device via Bluetooth.

With the addition of “–compat” as follows:
ExecStart=/usr/lib/bluetooth/bluetoothd --compat

And the permissions will also need to be changed:
sudo chmod 777 /var/run/sdp

Download a terminal emulator app on an Android device

In order to see the terminal output once the BB-400 has connected to the Android device via Bluetooth, a terminal emulator app can be used.

A number of terminal emulator apps can be found on the Google Play Store. For Android version 8.1.0 Bluetooth Serial Controller is recommended, and for older versions SENA BTerm is recommended.

Enabling the BB-400 for Bluetooth connectivity

In Linux, open up a terminal and view what Bluetooth services are already available:
1.sdptool browse local

Check for a serial port service and note its channel number, if there are no serial ports available then one can be added by:
2.sdptool add --channel=22 SP

Check that the channel is now available by re-running command 1.
The output should look similar to below: 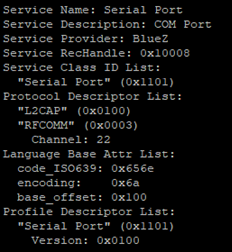 The main way in which Linux configures Bluetooth devices is via the Bluetoothctl command, for more information regarding Bluetoothctl see the following link: https://wiki.archlinux.org/index.php/Bluetooth_headset.

Within a new terminal connect to Bluetoothctl:
sudo bluetoothctl

Switch agent on which will allow the devices to negotiate the Bluetooth pairing code:
agent on

Start scanning. This will provide a list of MAC addresses for devices that are nearby and available for the BB-400 to pair/connect to. This command also switches discovery on so that your device and the device you wish to pair/connect with can be found:
scan on

Now the command to pair the BB-400 with the Android device can be run:
pair <MAC address>
e.g.

Once the devices are paired, the BB-400 can be connected to the Android device using the following command:
connect <MAC address>

It is possible that when trying to connect the BB-400 to a device for the first time, an error message may occur:

Going back to the terminal where Bluetoothctl was used to connect to the device, retry the command:
connect <MAC address>

And the BB-400 and the Android device should now be connected.

If it is not possible to connect to the BB-400, then try downloading a different terminal emulator app and reconnecting to the BB-400.

RFCOMM is a set of Bluetooth transport protocols that allow reliable data stream to the user. It is one of the most widely used protocol by Bluetooth devices.

In a new terminal, RFCOMM can be used to ‘listen’ to the channel number of the serial port service you added/used at the beginning of this FAQ:
sudo rfcomm listen /dev/rfcomm0 22

The following message should appear:

which confirms that the BB-400 has connected to an android device using Bluetooth.

Anything that is typed on the terminal emulator app on the Android device will go to /dev/rfcomm0.
The command:
cat /dev/rfcomm0

will allow the user to view everything that is typed into the app in the terminal.