How can I send IO count data to InfluxDB and Grafana?

This FAQ will explain how Node-RED can be used to send data to InfluxDB and how this data can be visualised in Grafana. We will describe fully the example of sending IO count data from the BB-400 to a database in InfluxDB and then we will produce graphical visualisations of this data.

In industry, it is common to count how often something changes, store the information, and then review and analyse the information in a graph. For example temperature, parts counts, or machine errors. This application provides a simple template to achieve that.

Node-Red is a browser-based application useful for wiring together hardware devices and other services in an easy-to-use way. Node-RED is a programming tool but prior coding experience is not necessary to use it.

InfluDB is a SQL-like, open-source time-series database. InfluxDB can be used to create query and store data.

The diagram below shows an overview of each of the applications and their TCP port number:

The following sections will take you through each step ensuring you have access to each of these applications.

On the BB-400 Node-RED is available by default, so you do not have to install it. You can access Node-RED by selecting the Apps tab on the webserver page. The default username is ‘bb’, and the default password is the last 4 characters of your MAC address:

NB: The script can take 5-10 minutes to complete.

The command in the previous section should have installed InfluxDB onto your device.To check the status of InfluxDB run the following command:

You should see a green “active” status. If the service is not running try:

And then rerun the command to check the status:

Now when we run the influx command, we can access the service:

To see the status of the Grafana service:

You should see a green “active” status. If the service is not running try:

And then rerun the command to check the status:

Now we have installed Grafana onto the BB-400 we can log into the service. 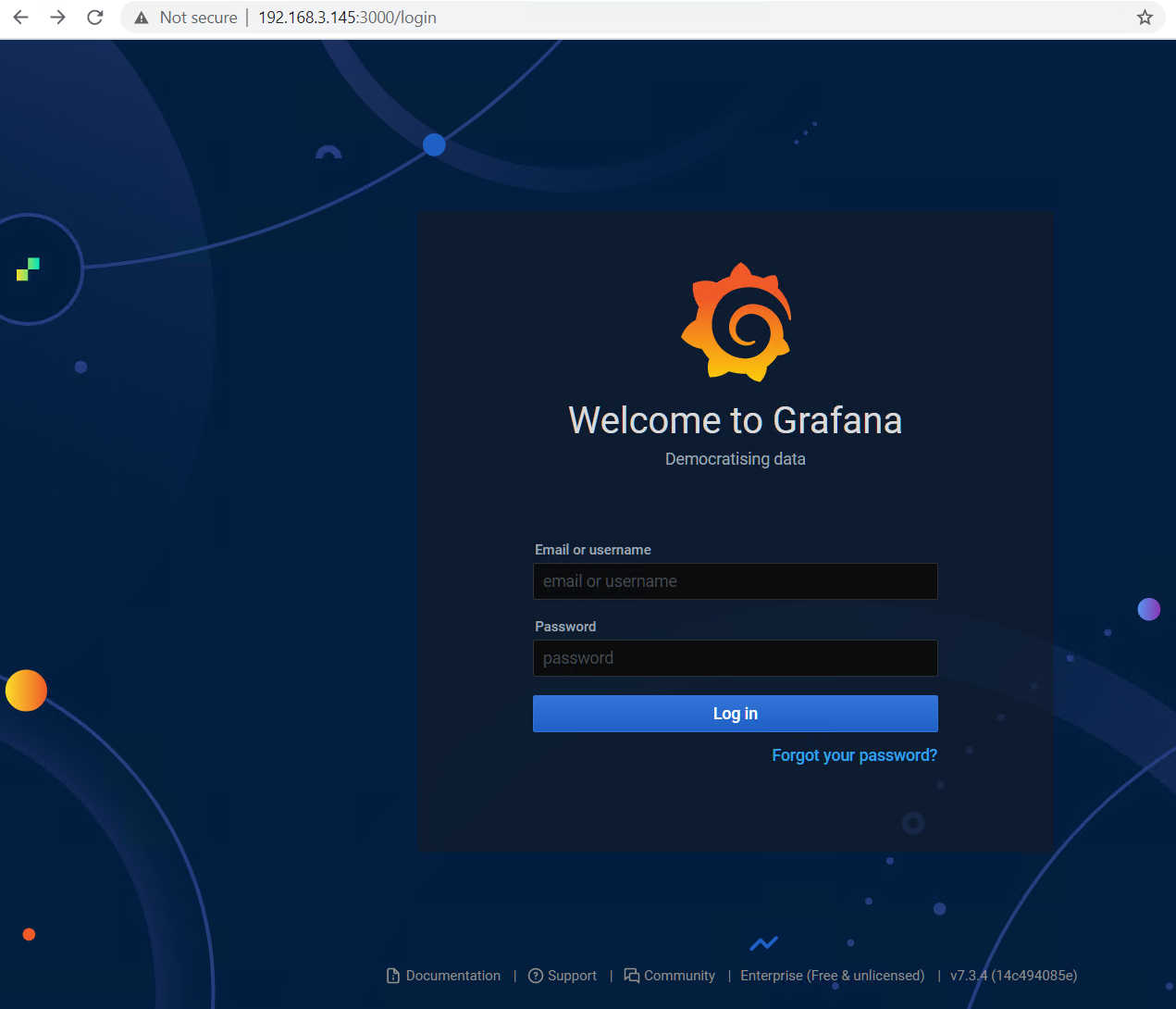 When logging in for the first time, both the username and password are “admin”.
You will then be prompted to change your password and you have successfully set up Grafana.

For more information please refer to the official documentation here:

By this point you should have Node-RED, InfluxDB and Grafana up and running.Next we will configure Node-RED so that we can send data to InfluxDB and then view this data on Grafana.

Sending data from Node-RED to InfluxDB

To import the Node-RED flow click on the menu in the top right-hand corner, then:
Import > Examples > Brainboxes > InfluxDB_BBCount, as the screenshot below shows: 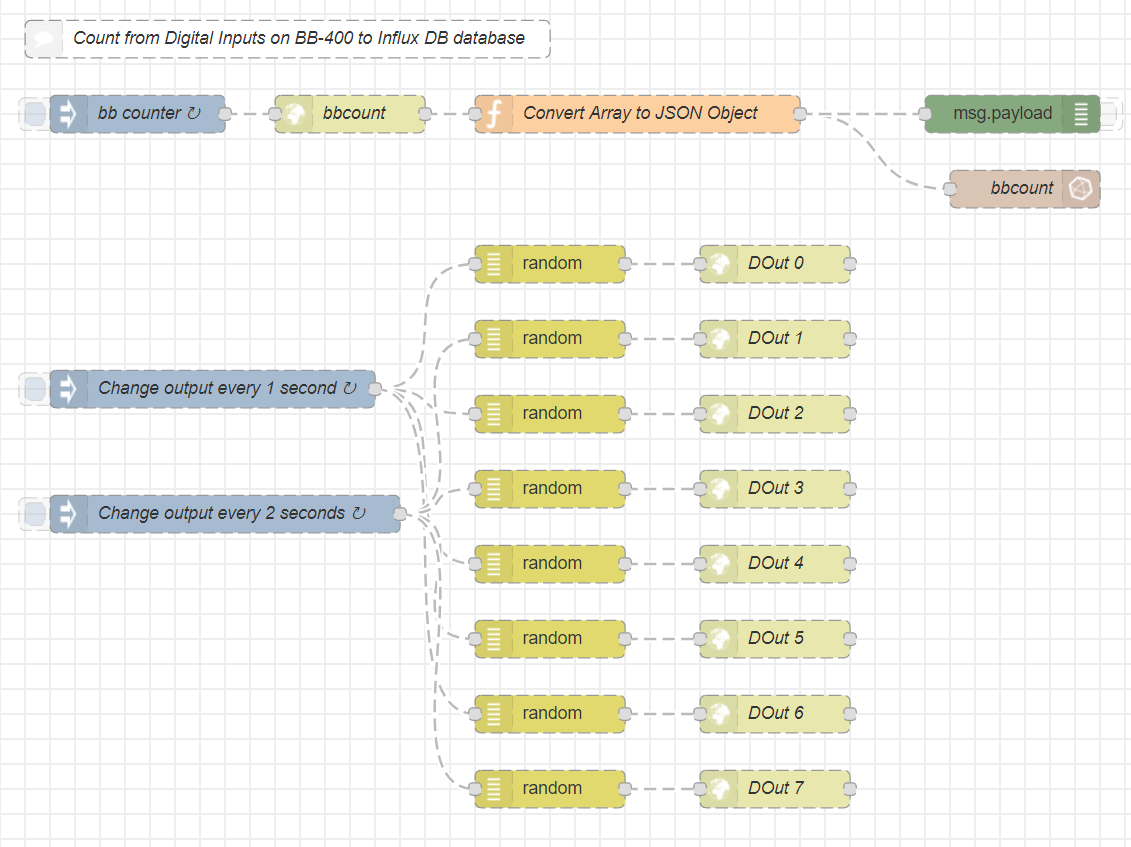 You can see the InfluxDB node

is titled ‘bbcount’. This is the name of the database we will create in InfluxDB. If you would like to give your database a different name, then make sure you update the server URL by editing this node: 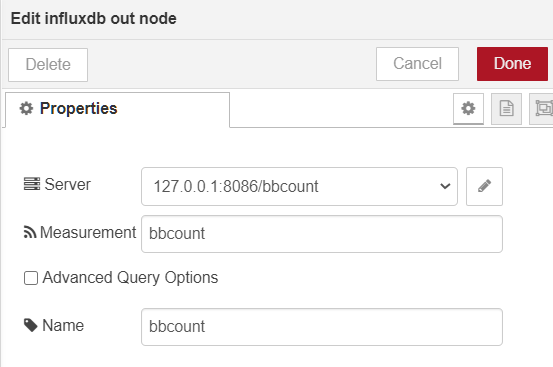 Now we have explained how the Node-RED flows work, we will create the database in InfluxDB and send some data over.

Creating a database in InfluxDB

You should have installed InfluxDB by this step, next run an instance of InfluxDB by running the command in a BB-400 terminal:

Now run the following command to view all the databases present:

We want to use the bbcount database:

Observing the data in InfluxDB

The database will be empty to begin with, but if we go back to our Node-RED flows and deploy both flows, then run the command below we should see some data:

This screenshot shows the counts for each IO line over time. The columns represent the IO line, and each row is a dataset at a given time. Make sure to limit the number of values you output (e.g. LIMIT 10) otherwise when your database becomes populated with a lot of data it can take a while to load.

The data above is shown in ascending time, it might be useful to see the most recent changes in IO counts first, so we can use the following command:

You can see from the image below that the IO count data matches the data we observe in the InfluxDB bbcount database: 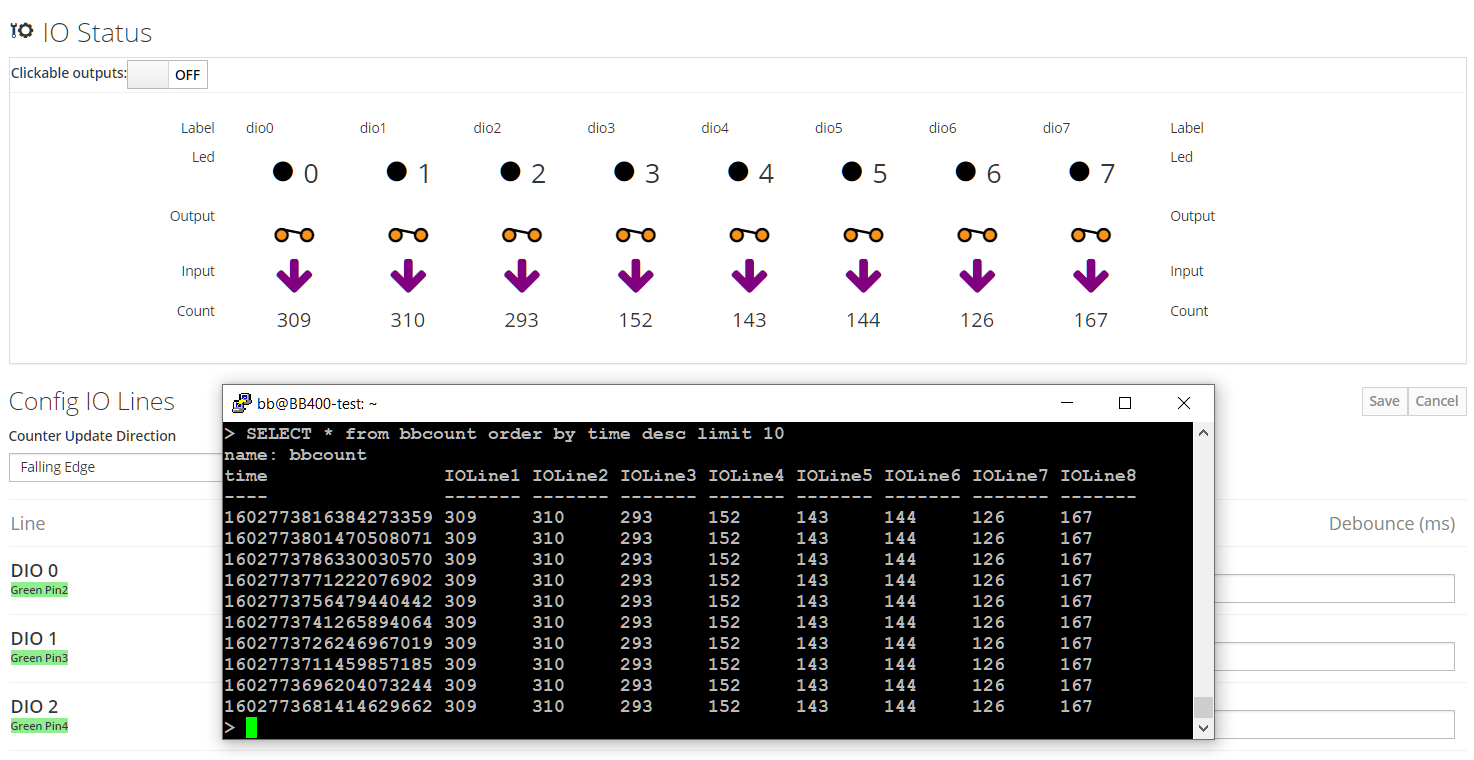 Now we have our database working, we can view this data within Grafana. Log back into Grafana. We want to add an InfluxDB data source. Click on the configuration icon and then data sources: 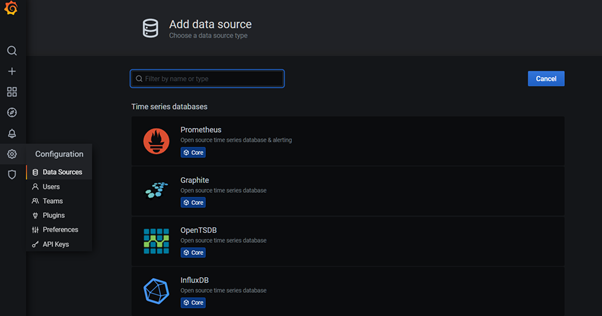 Change the type to InfluxDB and provide the URL “http://localhost:8086”. This URL ensures the Grafana instance is on the same IP address as your BB-400: 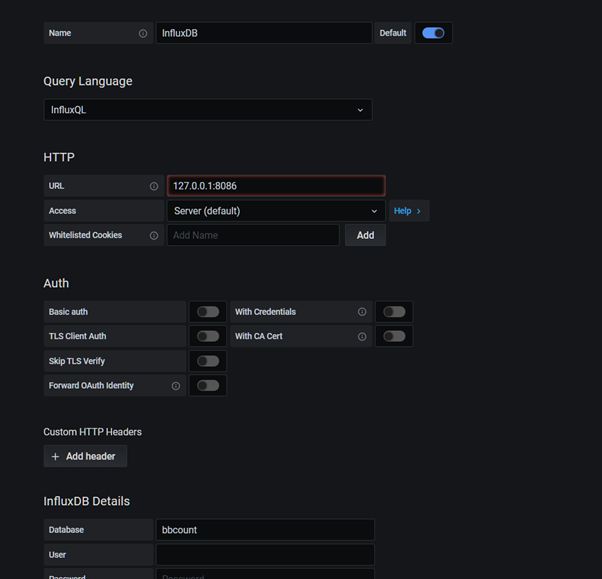 Underneath the InfluxDB Details heading, make sure you add the Database name as “bbcount”:

Now when you save changes you should see the following:

Now we can start creating some graphs. Click on the dashboard icon: 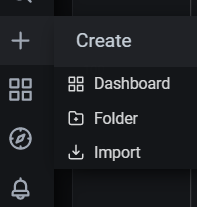 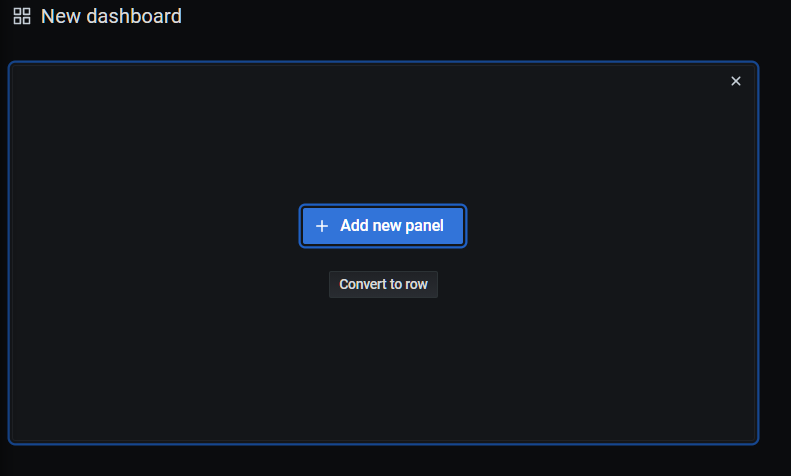 Change from default to InfluxDB: 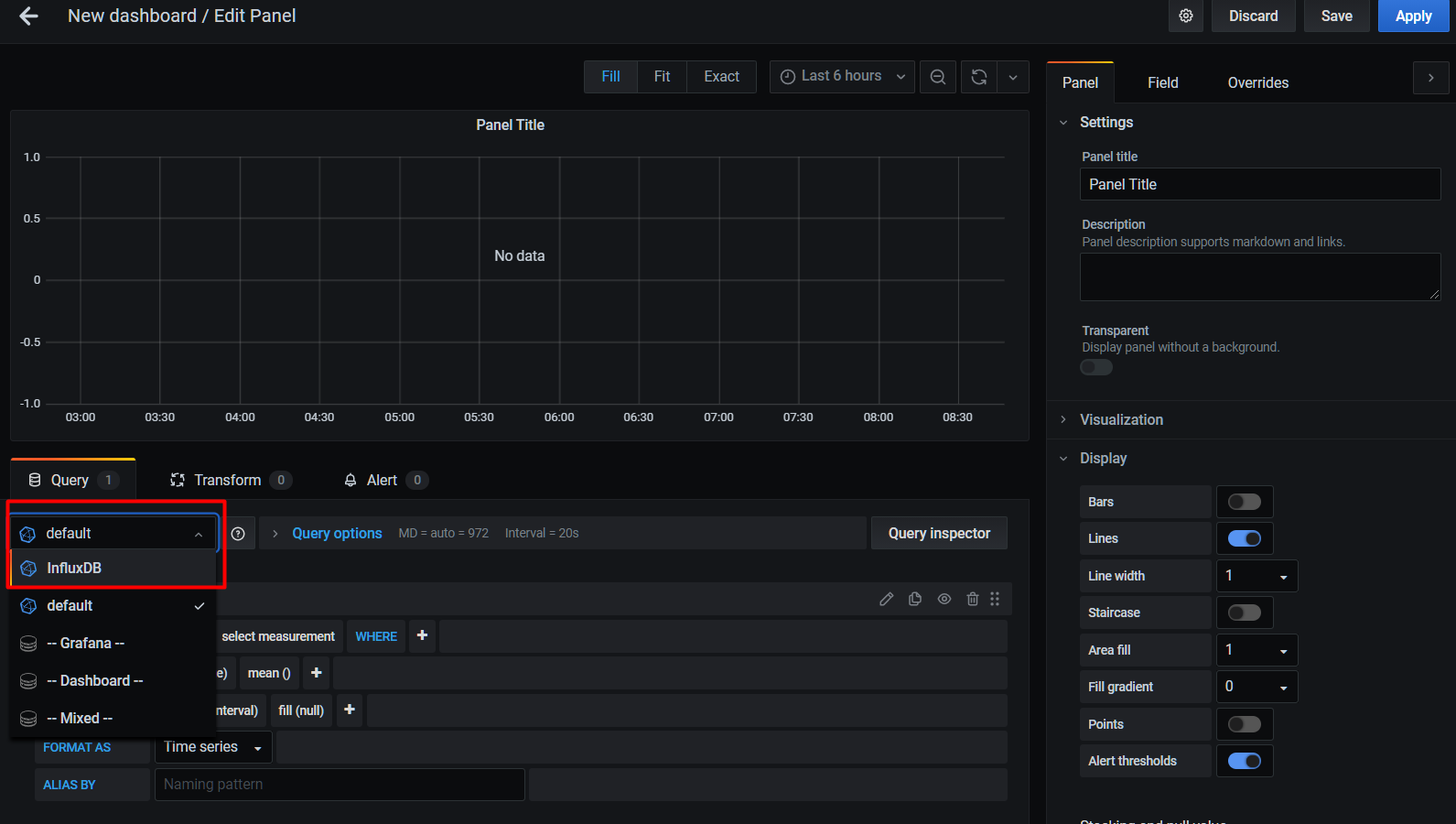 For the initial graph to see the change in all the IO counts over time, in the query section we can add a very simple query. Click on the pencil on the right-hand side, running the command in a BB-400 terminal:

And you can see all the data is there: 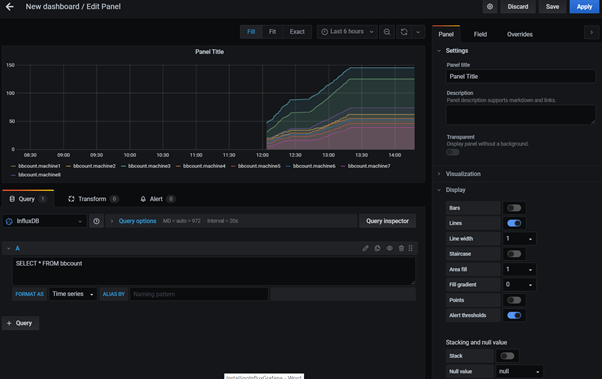 And we would create a new panel for each of the IO lines, until there are 8 representations like so: 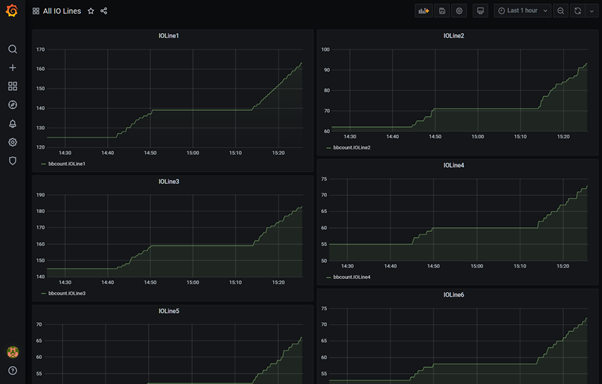 To edit an existing graph, hover over the title and click on Edit: 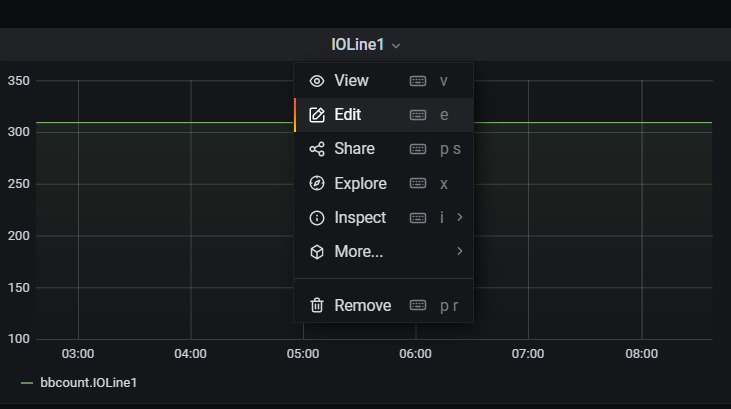 You have successfully followed this example to count the change in BB-400 IO lines, using Node-Red, send the data to InfluxDB and then visualise the changes on Grafana. Now you can adapt the database and the graphs accordingly, or continue to monitor the graphs you have created in this FAQ.